The stars call out

Praise to our God

The sun and moon

The birds of the air

Bows down to the King.

Is finer than gold

Unmask the sins of men

You show the way to salvation

And lay out the path of holiness

I will praise you

With all my strength

Then the people stood at a distance, while Moses drew near to the thick darkness where God was.

From the holy mountain, the Lord gives Moses the ten commandments. These commandments are to be the foundation of all relationships in the land.

The laws were not given capriciously. Some come with blessings for obedience or curses for disobedience. There are consequences that flow from living in covenant with the Lord.

The people see the smoke and lightning and hear the powerful sounds of God’s presence and they are afraid. They ask Moses to speak to them on God’s behalf. Moses exhorts them to seek God’s presence for themselves but they refuse.

It is right to be afraid of God. He is the one who can destroy not just the body but the spirit also. We must always remember that God is holy- very different to us.

It is important also to recognise God’s immeasurable love for us. The people saw the manifestations of God’s holiness and they were afraid to draw close to Him lest He kill them. But Moses pressed in, attracted to God’s holiness and love.

Holding back from God out of fear holds no blessing. Pressing in, regardless of the cost brings awesome relationship with our Lord.

Today Lord I choose to press in, to draw closer to you. I bring my worship, but also my body and spirit, laying myself before you as a living sacrifice. Amen.

Today was the big day! After a couple of months of being starved of “discount variety” shopping our Crazy Clark’s store reopened as Crazy Sams. To avoid confusion, they’ve left the old signage up, restocked with pretty much the same stock and re-employed the same staff.

The whole town seemed to be squashed into the store and traffic on Maitland Street was really heavy- more like a Saturday before Christmas than Monday morning.

Margaret spotted some magnetic cross plaques with flowers and Bible verses- ideal for our christian book shop. They were $2 each, and after some debate we decided to buy all 25 of them. We’ll sell them on for $3.

We toured the shop and bought a cheap roller blind for one of the doors at home where the sun shines through in summer. A few other odds and ends and we went to the checkout.

After lunch, I got to install the blind and a couple of venetians. I did a creditable job and didn’t get too grumpy.

Late in the afternoon Margaret decided to go back to Crazy’s and buy another blind. As she headed to the checkout she heard the man we had earlier spotted as a Head Office type (he turned out to be the owner of the chain of stores) talking to Matt, the store manager. He was saying that the biggest selling item of the day was the crosses. He was thinking that Narrabri must be a particularly religious town. A lady from the AOG church heard the conversation and told Matt that she had seen us buy all those crosses. Matt told Margaret he didn’t care if we bought them all for $2 and sold them for $4, but he had better warn the owner not to get too excited about buying more of them.

Meanwhile the guy from Head Office saw Margaret with the roller blind and he told her he had got them really cheap and was wondering how they would be. So she told him that we had bought one in the morning and we thought the chain to roll it up and down was too clunky and probably wouldn’t last long, and that there were no instructions so some people would find it hard to install them.

So within a few hours of our purchase, the staff knew who had bought which items and what we thought of them!

All part of the fun of living in a small community.

I love spring time. The warmer weather seems to bring boundless energy to everything, including me!

There are negatives of course- swooping magpies and snakes would be my least favourite parts of spring.

The positives include bottlebrush flowers glowing in the sunlight. 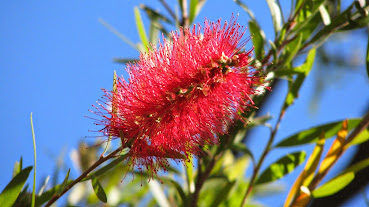 A stray Pattersons curse flowers in a neglected corner of my yard. 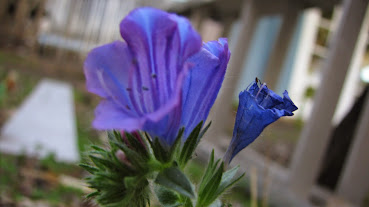 One of the mantras of climate change activists is that there will be more extreme weather events such as hurricanes and cyclones. “In fast we are seeing it now” they often add earnestly, despite the fact that both the U.S. and Australia have recorded below average storm intensities and frequency on the last decade.

Insurance companies, who stand to lose trillions if they get this wrong, are also saying there has been no change in their business plans.

WUWT reader “jimbo” writes in Tips and Notes: We often hear how climate disasters / extreme weather events are getting worse. We know there is no evidence and sometimes the opposite is seen. Now let’s look at the insurance industry. Surely they could tell us that things are indeed getting worse than we thought!

Surely Warren Buffett has an eye for increasing premiums in the face of extreme weather events?

CNBC – 3 March 2014
No climate change impact on insurance biz: Buffett
The effects of climate change, “if any,” have not affected the insurance market, billionaire Warren Buffett told CNBC on Monday—adding he’s not calculating the probabilities of catastrophes any differently.

What about Lloyd’s of London?

Reuters – 25 September 2014
….But Lloyd’s combined ratio, a measure of profitability showing how much insurance premium is paid out in claims and expenses, deteriorated to 88.2 percent from 86.9 percent. A ratio below 100 percent indicates an underwriting profit. “It’s been a fairly benign period for major catastrophes,” Parry said.

This morning I was thinking about how I have felt uninspired about blogging lately. I’ve shared the odd post that I have found elsewhere and the routine things like our sermon posts, but I’ve had no passion to write anything.

I prayed about it and felt that God was saying that it was because I read too much junk stuff on both Facebook and Google Plus. Just as junk food dulls our appetite for genuine food and, after the initial boost, actually de-energise us, so the constant bombardment of small doses of junk data dulls our appetite for useful input and removes our ability to be creative.

We live in a society that is satiated with empty calories and useless food. When I was growing up, there were very few franchised food outlets, and we regarded a trip to McDonalds as a once a year treat. Even a glass of Coke or lemonade was a rare treat. Now these sugar, fat and salt concoctions are almost a daily staple for many people.

We live in a society that is also overfed with information. The internet has brought the knowledge of the world to everyone’s fingertips. But we want to consume cat pictures and funny thoughts in 140 characters or less. Politicians have to deliver complex policies in 15 second sound grabs or we grow bored.

So we fill up on burgers and cola and blob out in front of screens and wonder why we have an obesity and dumbness epidemic.

Contrary to our fast fill mentality, God has created us to be slow growers. He deals with us over a life-time, gently moulding us into his image. His word needs to be consumed and chewed over slowly- there are whole chapters to be meditated over not Tweet length verses.

I’m not ready to go cold turkey on social media, but I am going to restrict my consumption of it. It’s time to reclaim my time and offer it back to God as an offering.

The sermon for September 28th 2014 is now available on the New Life web-site.

In this sermon, which is based on Exodus 17:1-7, I talk about Living Water.

Click here to listen or here for the mp3.

Clinging to your rights

In a world of scorn

Sharing life with all

So Moses struck the rock as he was told, and water gushed out as the elders looked on.

Observation
The Israelites move on at the Lord’s command. They camp at Rephidim but there is no water there.

The people complain against Moses and demand that he supply them with water.

Moses goes to the Lord who tells him to take his staff and use it to strike the rock at Mount Sinai. Moses does this, and water comes gushing out of the rock.

Application
The people move through the wilderness at the clear direction of the Lord- cloud during the day and fire at night moving ahead of them. They are fed daily by God’s miracles. They escaped Egypt miraculously.

Despite all of this, they never seem to get the message that God is with them and will supply all they need.

Even when we have experienced the provision and bounty of the Lord, we often forget He is wonderfully kind and supplies all we need.

We need to keep on reminding ourselves of all that God has done in the past to remind us to trust Him in the present.

Prayer
Father, thank you for all that you do in my life each day. Please help me top trust you in all things. Amen.

I wonder how many of these studies will start to emerge over the next few years- and how many will be reported by the ABC.

From Watts Up With That

The rise in temperatures along the U.S. West Coast during the past century is almost entirely the result of natural forces — not human emissions of greenhouse gases, according to a major new study released today in the Proceedings of the National Academy of Sciences.

Northeast Pacific coastal warming since 1900 is often ascribed to anthropogenic greenhouse forcing, whereas multidecadal temperature changes are widely interpreted in the framework of the Pacific Decadal Oscillation (PDO), which responds to regional atmospheric dynamics. This study uses several independent data sources to demonstrate that century-long warming around the northeast Pacific margins, like multidecadal variability, can be primarily attributed to changes in atmospheric circulation. It presents a significant reinterpretation of the region’s recent climate change origins, showing that atmospheric conditions have changed substantially over the last century, that these changes are not likely related to historical anthropogenic and natural radiative forcing, and that dynamical mechanisms of interannual and multidecadal temperature variability can also apply to observed century-long trends.