In this sermon, which is based on Exodus 16:1-20, Susan Nash talks about Fresh Bread.

Have you ever wondered what the world would look like if the leaders of a nation or a continent decided to base their decisions on fairy tales? Look no further than the EU. Not content with their victory of making vacuum cleaners more efficient by simply banning those with motors more powerful than 1600 W, they are now planning to cool the planet by making people use slow kettles and hair dryers.

You, foolish plebian, thought that a hair dryer was for drying hair. Not so. The purpose of a hair dryer is to change the climate. Let’s stop the storms by slow-mowing the lawn. That sort of thing…

Thus and verily has the EU announced that high-power appliances may now be banned.

A study ordered by the European Commission, currently in draft form, has identified up to 30 electrical appliances including lawn mowers, smart phones and kettles that could be covered by the EU’s Ecodesign directive outlawing high-wattage devices.

Serfs in the EU will probably spend longer drying their hair, and more time waiting for the kettle to boil  in a quest to produce slightly less CO2. This is in the hope that less CO2 might cool a world that hasn’t really warmed for a decade and a half. It’s a case of not so much blow-drying, and more slow-drying. Likewise, stupid punters may wonder how a lower voltage kettle can reduce emissions. The laws of physics suggest water is heated by watts, P

I suppose the obvious thing is for the EU to legislate that water will boil at 90C.

Methinks ultimately this will use more electricity and produce more emissions. It is possible that punters, tired of waiting, will simply boil more water at the start of the day, leaving the kettle fuller and hotter all day in between cups of tea. Likewise, 2500W fan heaters make good substitutes for hair dryers. China may start producing fan heaters that you can hold in one hand.

If there are any manufacturers left  in Europe which still export hair-dryers or small electrical goods, I guess those factories in Guandong look all the more appealing now. Shame about the jobs.

Get in now and buy modern electrical goods while you can.

On Monday many of the best vacuum cleaners available for sale in the UK will be banned as a result of the EU energy efficiency rules that prohibit the manufacture or importing any vacuums with motors above 1,600 watts.

Tesco said sales of the most powerful vacuums had soared by as much as 94 per cent for some models after the Telegraph reported consumer group Which? urging shoppers to act quickly before they sold out forever.

The EU is out of control. Send letters to your politicians now.  Don’t ask for this legislation to be amended, ask for the EU to be amended. Your nation should leave now.

Last week strident atheist Richard Dawkins wrote that mothers who find they are expecting a child with Downs’ syndrome have a moral responsibility to abort the baby. Elizabeth Schilz disagrees:

My Oma was born in a little village near the town of Hadamar. Hadamar sits in the shadow of a tall hill called Mönchberg – Monk’s Mountain. On top of that hill stands an old Franciscan monastery, which was converted into a state hospital and nursing home in 1803. In 1940, however, that hospital was turned into one of the infamous Nazi ‘killing centres’. These were the six institutions spread all over Germany where first children, and later also adults, with disabilities such as (in the language of those times) ‘idiocy and mongolism (especially when associated with blindness and deafness), microcephaly, hydrocephaly, malformations of all kinds, especially of limbs, head, and spinal column, and paralysis, including spastic conditions’ were taken, systematically starved to death or gassed, and cremated.

Oma rarely spoke to us about her experiences during the war. But we know that she was affected by the experience of living in the shadow of Mönchberg. I was the fifth of sixth children. Oma loved us all very dearly, but she had a favorite, and she never made even the feeblest attempt to hide it. The other five of us were all her Silberfische – silverfishes. My older brother, Jim, was her Goldfisch – her goldfish.

Jim was born ‘mentally retarded’. When he was born back in 1952, the medical professionals counselled my parents to send him to live in an institution. My parents refused, and with much work and love, they taught Jim to do all those things that the medical professionals told my parents he would never do, like talk and walk. Jim graduated from high school. He is bilingual – fluent in German as well as English. He reads the newspaper everyday. Jim has held the same full-time position in the kitchen of a country club for twenty years now, and does not receive any sort of public assistance. Jim is known around our family as ‘the human jukebox’, for his uncanny ability to remember the lyrics to any song, from any era, by any artist.

In some sense, although we did not live in the town of Hadamar, I think that all the kids in my family grew up in the shadow of Mönchberg as well.

“What do you benefit if you gain the whole world but lose your soul? Is anything worth more than your soul?”

Observation
Jesus begins to tell His disciples that He must suffer and be crucified, but on the third day He will rise from the dead.
Peter reprimands the Lord for this negative confession, but Jesus says, “Get away from me, Satan!”
Anyone who wants to follow Jesus must die to their old selves. To give up our life for Him is to save it, but to hold onto our life is to lose it.

Application
Everything about following Jesus us counter-intuitive. This is not because God’s ways are crazy, but because sin has so overturned our values that what seems right and natural is often wrong and sinful.
This is why Jesus was so strong in His rebuke of Peter. Peter was looking at things from a human point of view when a different (God) perspective was needed.
To follow Jesus means that God always comes first. We lay our lives at His feet and allow Him to determine the course of our lives.
In human terms this seems really stupid, but in God’s eyes there really is no other way.

Prayer
Show me your ways, Lord. Help me to live in that constant sense of being dead to my own ambitions and alive to your plans for me. Amen 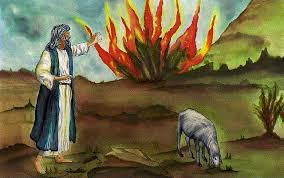 God replied to Moses, “I AM WHO I AM. Say this to the people of Israel: I AM has sent me to you.”

Observation
Moses is in the wilderness tending his father-in-law’s sheep. At Mount Sinai the Lord reveals Himself as a blazing fire in a bush.
God calls to Moses from the bush. He tells Moses that He has heard the cries of distress from His people, so He is going to rescue them and take them to their own land. Moses is to go to Pharaoh and lead Israel out of Egypt.
Moses asks “What name will we know you by?” The Lord says His holy name, “I AM WHO I AM.”

Application
The Lord announces in verse 8 that He has come down to rescue His people and lead them out. Then immediately He tells Moses, “Now go, for I am sending you.”
God does nothing without raising up people. His “coming down” consists often of “calling up” a person or a people.
Moses asks “Who am I to do this?” The answer is “It doesn’t matter who you are, for I am the Lord and I am with you.”
We might feel that we are inadequate for the task before us- no training, no ability, no background. To God that doesn’t matter. The only qualification He looks for is obedience.

Prayer
Father I stand here in your presence, aware of your calling and my weakness. Lead me, direct me, empower me. Amen.

The sermon for August 24th 2014 is now available on the New Life web-site.

In this sermon, which is based on Romans 12:1-8, I talk about getting on the altar.